The Woodburn Fire District has received a $35,000 grant for the hiring of additional firefighters during the 2022 fire season. Two grant funded firefighters began staffing WFD’s Brush 21 on July 8th.  Brush 21 is a small scale fire engine that is specifically designed for rapid response to brush and grass fires.

WFD, along with fire service agencies across the state, was awarded the seasonal grant as a proactive means to temporarily increase firefighter staffing levels during the annual fire season. The grant program administered by the Oregon State Fire Marshal’s Office is a result of Senate Bill 762 that was approved by legislators in the wake of the devastating 2020 wildland fires that destroyed thousands of structures and scorched of over 1 million acres.

Woodburn Fire Chief Joe Budge expressed appreciation for the grant funding, “In light of the wildfire seasons that we have experienced during recent years, the fire district would like to thank the state leadership for taking a proactive approach to strengthen the district’s firefighting capability. The temporary funding improves the district’s ability to quickly respond to wildland fires and helps to support the district’s overall mission to safeguard the community during the busy summer months.”

The grant funds have been used to temporarily hire two members from the district’s volunteer firefighter ranks.  Jared Redmon and Ian Niktab will be staffing Brush 21 on Fridays, Saturdays and Sundays from 7 am to 7 pm when the district’s peak activity engine (Engine 20) is off-duty.  Redmon and Niktab will respond to overlapping emergency calls when the career firefighter staffed engine is not available due to engagement at a previous call.  Brush 21 will also supplement career and volunteer firefighters in response to large scale incidents that require multiple resources to mitigate. The seasonal firefighter employment will remain in place until the grant funds are exhausted in mid-September.

Redmon began his fire service career in 2019 as a member of the district’s student resident volunteer program. Since joining the district, he has graduated from Chemeketa Community College with a degree in fire science, completed the emergency medical technician (EMT) certification program and has plans to attend paramedic school this fall. Redmon is a proven member of the fire district earning recognition as the 2020 Student of the Year, 2021 Volunteer Firefighter of the Year and a unit commendation in 2020 for his part in saving several homes threatened by the Wilhoit wildland fire near Molalla.

Niktab began volunteering with the fire district in December of 2021 and has already earned a Firefighter 1 certification that involves more than 200 hours of classroom lecture and hands-on training. Niktab is also nearing completion of the EMT training program that requires the equivalent of 6 months of full-time college enrollment. Prior to pursuing a fire service career, Niktab had a very successful long-standing teaching position with the Woodburn School District. His passion and dedication to serving the community were significant factors in his selection for a seasonal position with the fire district. 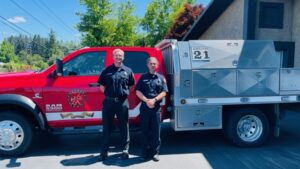 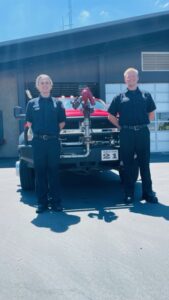