Woodburn Fire District’s Mitchell Raines was promoted to lieutenant during a ceremony at the board of directors meeting earlier this month. Lieutenant Raines is leading the firefighters assigned to the district’s new peak activity fire engine that was put into service on November 1st.

Raines is one of four career lieutenants that serve as the district’s front line supervisors responsible for maintaining 24 hour operational readiness for emergency response.  WFD lieutenants supervise four-person crews, manage emergency scenes, train firefighters and ensure that policies and procedures are upheld while keeping firefighters safe and meeting the district’s mission to protect the lives and property of those that live and work in Woodburn, Gervais and surrounding areas.

“Throughout his tenure with the district, Mitch has shown exemplary leadership skills.  He takes the initiative at every opportunity to teach and train new volunteers and career members”, commented Woodburn Fire Chief Joe Budge.  “Recently, Mitch jumped at the opportunity to run a six week training academy for four new career firefighters who joined the district in September.” The curriculum for the academy, which was developed by Raines, included rigorous academic and physical fitness components along with extensive training in firefighting and emergency medical procedures and the operation of the district’s fire engines and equipment.

Lieutenant Raines is an eight year veteran of the Woodburn Fire District with an associate’s degree in fire protection technology.  Throughout his years of service, Raines has been the recipient of many awards and commendations including recognition as Firefighter of the Year in 2016 and the Fire Chief’s award of excellence in community service in 2019. Raines also received a Letter of Appreciation following completion of an intensive 14 month, 1,208 hour training program to achieve certification as a paramedic. Raines will continue to serve as a paramedic when needed as part of the district’s on-going commitment to advanced life support service that was approved by voters as part of a local option levy in 2018. Lieutenant Raines, his wife Amber, and their newborn son Trevor are residents of the Woodburn community. 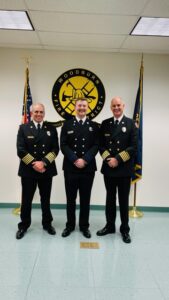